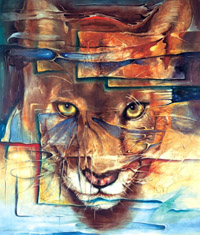 Panther Facts
Life History: Although we call them Florida panthers, these shy cats once roamed throughout the entire Southeast from east Texas to the Atlantic and north to parts of Tennessee.

Overhunting, loss of habitat, and reduction of their primary prey reduced their population to a remnant living on the southern tip of Florida.

They prefer upland habitat but will use diverse habitats. They mainly prey on deer and hogs.

Description: Overall coat color is tan (not black), often darker along center of back; creamy white under; black on back of ears, muzzle, and tail tip.

Males: average 130 pounds and measure 6 to 8 feet with the tail; shoulder height of 2.6 feet; front pad width greater than 2 inches. Males defend home ranges up to 200 sq. miles that overlap ranges of several females; mature at 3 years; average lifespan of 10 years if they reach adulthood.

Females: average 80 pounds and measure 5 to 7 feet with tail; shoulder height of 2.2 feet; front pad width less than 2 inches. Females have a home range of 80 sq. miles, overlapping with other females; mature at 1.5 years; breed year round with peak denning period in spring; den in palmetto thickets; gestation of 3 months; litter size 1-4, average of 2; kittens leave den at 2 months, independent at 1.5 years; 15 year lifespan if they reach adulthood.

Learn more facts about these extraordinary animals by visiting http://www.floridapanther.org/

West Indian manatees are large, gray aquatic mammals with bodies that taper to a flat, paddle-shaped tail.
They have two forelimbs, called flippers, with three to four nails. Their head and face are wrinkled with whiskers on the snout. The manatee's closest land relatives are the elephant and the hyrax, a small, gopher-sized mammal.
Manatees are believed to have evolved from a wading, plant-eating animal. The West Indian manatee is related to the West African manatee, the Amazonian manatee, the dugong, and to the Steller's sea cow, which was hunted to extinction in 1768. The average adult manatee is about three meters (9.8 feet) long and weighs between 362-544 kilograms (800-1,200 pounds).

Habitat and Range: Manatees can be found in shallow, slow-moving rivers, estuaries, saltwater bays, canals and coastal areas. Manatees are a migratory species. Within the United States, West Indian manatees are concentrated in Florida in the winter, but they can be found in summer months as far west as Texas and as far north as Virginia. However, these sightings are rare. Summer sightings in Alabama, Georgia and South Carolina are common. West Indian manatees can also be found in the coastal and inland waterways of Central America and along the northern coast of South America, although distribution in these areas may be spotty.

Behavior: Manatees are gentle and slow-moving. Most of their time is spent eating, resting, and in travel.
Manatees are completely herbivorous. They eat aquatic plants and can consume 10-15% of their body weight daily in vegetation. They graze for food along water bottoms and on the surface. They may rest submerged at the bottom or just below the surface, coming up to breathe on the average of every three to five minutes.
When manatees are using a great deal of energy, they may surface to breathe as often as every 30 seconds.
When resting, manatees have been known to stay submerged for up to 20 minutes.

Lifespan, Mortality, Population: West Indian manatees have no natural enemies, and it is believed they can live 60 years or more. Many manatee mortalities are human-related. Most human-related manatee mortalities occur from collisions with watercraft. Other causes of human-related manatee mortalities include being crushed and/or drowned in canal locks and flood control structures; ingestion of fish hooks, litter and monofilament line; and entanglement in crab trap lines. Ultimately, however, loss of habitat is the most serious threat facing manatees today. There are approximately 3,000 West Indian manatees left in the United States. Breeding and Reproduction:
The reproductive rate for manatees is slow. Female manatees are not sexually mature until about five years of age, and males are mature at approximately nine years of age. On average, one calf is born every two to five years, and twins are rare. The gestation period is about a year. Mothers nurse their young for one to two years, so a calf may remain dependent on its mother during that time.

Legal Protection: West Indian manatees in the United States are protected under federal law by the Marine Mammal
Protection Act of 1972 and the Endangered Species Act of 1973, which make it illegal to harass, hunt, capture, or kill any marine mammal. West Indian manatees are also protected by the Florida Manatee Sanctuary Act of 1978 which states: "It is unlawful for any person, at any time, intentionally or negligently, to annoy, molest, harass, or disturb any manatee." Anyone convicted of violating Florida's state law faces a possible maximum fine of $500 and/or imprisonment for up to 60 days. Conviction on the federal level is punishable by a fine of up to $100,000 and/or one year in prison. Conservation: The Florida Manatee Recovery Plan was developed as a result of the Endangered Species Act. The recovery plan is coordinated by the U.S. Fish & Wildlife Service (USFWS)
and sets forth a list of tasks geared toward recovering manatees from their current endangered status. Save the Manatee Club is part of the Manatee Recovery Team, which carries out the tasks in the plan under the auspices of the USFWS. In addition, SMC is part of the Manatee Technical Advisory Council, which makes recommendations to government officials on manatee protection issues.

In October of 1989, Florida's Governor and Cabinet directed the Florida Department of Environmental Protection to work with 13 "key" manatee counties in Florida to reduce injuries and deaths. These 13 counties include:
Duval, Volusia , Citrus, Brevard, Indian River, St. Lucie, Martin, Palm Beach, Broward, Dade, Collier, Lee and Sarasota. Over 80% of manatee mortalities have occurred in these counties. The first task of these 13 county governments, working with the state, is to develop site specific boat speed zones to reduce watercraft collisions. The second task is to develop comprehensive manatee protection plans (MPP) at the local level. Twelve of the 13 key counties have implemented boat speed zones for manatee protection. Several key counties are currently at work on their MPPs. Other conservation measures deemed important to saving manatees include:
research covering the biology, mortality, population and distribution, behavior, and habitat of manatees; implementation of management plans; posting of regulatory speed signs and levying of fines for excess speeds in designated areas; manatee education and public awareness programs; and public acquisition of critical habitat and creation of sanctuaries.

The text above is from http://www.savethemanatee.org

HELP SAVE THE FLORIDA PANTHER

SUPPORT SAVE THE MANATEES CLUB